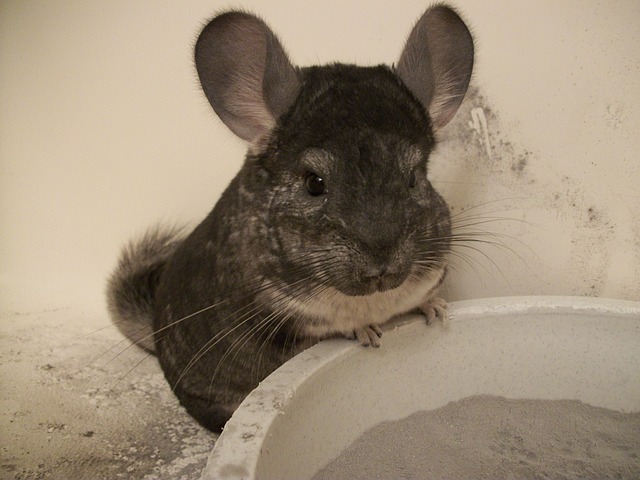 Before adopting a pet, it is important to know their sleep habits.

If you are considering adopting a chinchilla, you should know that they don’t follow our sleep-wake cycle. So does that mean they are nocturnal?

Technically chinchillas are crepuscular, not nocturnal.

But hold on, what exactly does crepuscular mean? And what does this mean for someone who is considering adopting a chinchilla?

Don’t worry, we are going to dive into all of this together. By the end of this post, you will understand the sleep schedule of chinchillas. This will help you make an informed decision about adopting one of these adorable crepuscular creatures.

What Does Crepuscular Mean?

So we now know that chinchillas are crepuscular, not nocturnal. But what exactly does this mean?

Crepuscular animals are most active during twilight hours (dawn and dusk). Instead of only sleeping during the day or the night, they sleep during parts of the day and the night.

Animals developed crepuscular habits for a variety of reasons. These instincts are most likely linked to hunting. Wild chinchillas are considered prey, not predators. So they had to develop a sleep-wake cycle that best helped them avoid predators.

Also, chinchillas can overheated easily. So it makes sense that they are active during the darker, cooler parts of the day. In the wild, chinchillas find a dark space to sleep during the hot, sunny afternoons.

What is the Difference Between Crepuscular, Nocturnal, and Diurnal?

Before we go any further, let’s look at three essential terms:

Diurnal animals are active during the day and sleep at night. Does that sound like you? Yes, humans are diurnal. But for a variety of social and cultural reasons, humans can adapt to a nocturnal schedule. Songbirds and squirrels are more strict diurnal creatures. They always sleep during the night and stay active during the day. And although humans can adapt to a nocturnal schedule, you should not try to adjust your chinchilla’s schedule. These creatures can become ill if their sleep-schedule is altered.

Can I Transition my Chinchilla to a Diurnal Schedule?

As we’ve learned, chinchillas are crepuscular animals. But they are typically very active at night, which makes some people mistake them as nocturnal creatures.

When chinchillas are awake, they are often very active. They like to run, jump, eat, chew, and play. And they can make a lot of noise during these activities. Their active nights can be very disturbing for us diurnal creatures.

So, can you help your chinchilla adopt a diurnal schedule?

What Should a Chinchilla Cage Include?

Now we know that chinchillas are crepuscular. But what else do you need to know about their sleeping habits? Essentially, you just need to know how to create an environment that helps your chinchilla feel comfortable enough to sleep.

As a chinchilla owner, it is important to create a safe and comfortable cage for your chinchilla. This will help them sleep better and stay entertained during their active hours.

Also, you should not (unless you have to) keep their cage in your bedroom. Since they are active at dusk and night, they might keep you up while you are trying to sleep. To avoid this, keep their cage in another area of your house. That way, they can make all the noise they want without disturbing your sleep.

Of course, their cage should also include a water bottle, food, and some type of absorptive lining.

So, contrary to popular belief, chinchillas are not nocturnal.

Yes, they are often active at night. And this behavior can be frustrating, especially if their cage is close to your bedroom. But in reality, chinchillas are crepuscular creatures. They are most active during the twilight hours.

Make sure to consider this before adopting a chinchilla. You need to be prepared for a pet that is only active in the early morning and late evening. But, if this schedule doesn’t bother you, chinchillas can make great pets. They are affectionate, adorable, and robust creatures.

Before reading this article, did you know that chinchillas are crepuscular? Let us know!

Keep in mind that I may receive commissions when you click my links and make purchases. However, this does not impact my reviews and comparisons. I always try to be fair and help you make the best choices for both for you and your pets.

As an Amazon Associate, I earn from qualifying purchases.