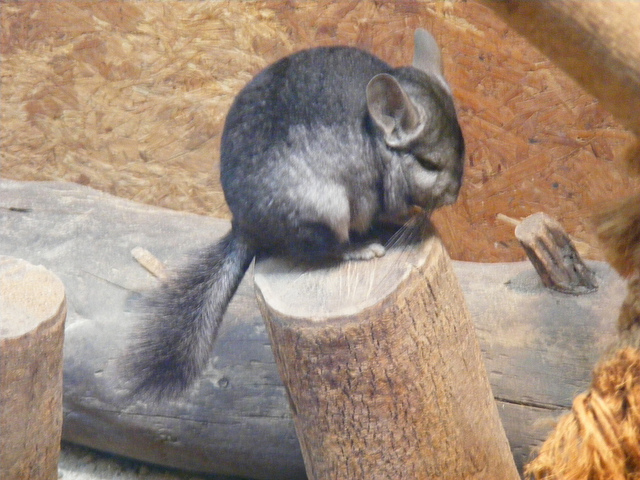 Wait, where are chinchillas from?

If you are considering adopting a chinchilla, you probably want to know everything about these adorable creatures. In order to create a perfect environment for your pet, you need to understand their natural habitat.

Wild chinchillas are found in South America. But do you know what their habitats look like? It’s ok if you don’t, we are going to cover all of that in this post. So if you are ready to learn more about the natural habitat of chinchillas, read on!

Where Do Chinchillas Live in the Wild?

Chinchillas are found in the Andes Mountain range. These mountains extend through the South American countries of Chile, Bolivia, Peru, Ecuador, and Colombia.

Chinchillas tend to like high altitudes. They are often found living 3,000-15,000 feet above sea level.

The Andes Mountains offer a harsh climate. The terrain is spare and rocky. But chinchillas thrive in these cold and windy conditions.

What is a Chinchilla’s Natural Habitat?

So we now know that chinchillas are found in the Andes Mountains. But what exactly is their natural habitat?

The Andes are covered with volcanic ash, rocks, and shrubs. Chinchillas burrow under rocks and in between crevices of this semi-desert terrain.

Chinchillas are a social species. They live in herds of 14-100 chinchillas. Living in herds helps protect them from predators. “Look-out” chinchillas watch for other animals that share their natural habitat (mountain lions, birds, and snakes) while the other herd members rest, feed, or play.

Chinchillas only have a few ways to defend against predators. If attacked, they can spray urine or release patches of fur. Chinchillas are also skilled jumpers. They can leap 6 ft. into the air.

Chinchillas are grey, which helps them blend into the ash-colored landscape of the Andes. While this terrain might seem rugged and challenging, chinchillas have adapted to the landscape.

How did Chinchillas Adapt to their Natural Habitat?

So as we learned, chinchillas thrive in the rugged Andes Mountains. But what adaptations help them survive these conditions?

Well, a few things help these creatures survive in the Andes:

Chinchillas are known for their coats. Sadly, they are often illegally hunted for their beautiful fur. But why do chinchillas have these gorgeous coats?

Chinchillas also adapted to the thick volcanic dust in their habitat. They use the volcanic dust as a bath since their fur can’t get wet.

Chinchillas can also release their fur if they are attacked. This handy adaptation helps them escape from predators.

So, chinchillas adapted their thick coats to protect from the cold temperatures and predators in their natural habitat.

Vegetation is sparse in the Andes. So chinchillas had to adapt to their surroundings.

They consume the grass and shrubs found among the rocky terrain. Since their digestive system adapted to the available vegetation, they can’t easily digest foods high in fat or moisture. But they can survive on a simple diet of grass, hay, and water.

Chinchillas are a social species. They live in herds of 14-100 chinchillas. This helps protect them from the many predators they face in the Andes.

Although many people think chinchillas are nocturnal, they are actually crepuscular. This means they are most active during twilight hours.

And they adapted to this sleep/wake cycle as a result of their natural habitat.

By staying active during twilight, chinchillas avoid the hottest part of the day. They burrow before they sleep, so they can also hide from predators during this time.

How Can You Replicate a Chinchilla’s Natural Habitat?

Now that you know more about a chinchilla’s natural habitat you might be wondering, “can I replicate this environment for my pet?”

Of course, your home isn’t going to be exactly like the Andes Mountains. But there are ways you can replicate their natural habitat.

Chinchillas thrive in cool temperatures. So make sure you keep their cage in a cool, dark place. Don’t place is in direct sunlight.

You can fill their cage with rocks, branches, or small logs. This will give your chinchilla items to burrow under.

Make sure you provide your chinchilla with a proper diet. In the wild, they only eat certain types of vegetation. So, pet chinchillas should be fed hay, water, and chinchilla food pellet in order to closely replicate their natural diet.

Finally, chinchillas are social creatures. They prefer living in herds. So if you are going to adopt a chinchilla, be prepared to own at least two chinchillas. They thrive best in groups.

It is important to learn about chinchillas before you adopt one (or two!).

These creatures originated in the semi-desert climate of the Andes Mountains. They naturally adapted to this habitat. So, they are comfortable living in a cool and rugged terrain.

But once you understand their natural habitat, you can create a perfect environment for your own chinchillas. And these adorable creatures can make great pets.

Did you learn anything new about chinchillas’ natural habitat from our post? Let us know below!

Keep in mind that I may receive commissions when you click my links and make purchases. However, this does not impact my reviews and comparisons. I always try to be fair and help you make the best choices for both for you and your pets.

As an Amazon Associate, I earn from qualifying purchases.

This website uses cookies to improve your experience while you navigate through the website. Out of these, the cookies that are categorized as necessary are stored on your browser as they are essential for the working of basic functionalities of the website. We also use third-party cookies that help us analyze and understand how you use this website. These cookies will be stored in your browser only with your consent. You also have the option to opt-out of these cookies. But opting out of some of these cookies may affect your browsing experience.
Necessary Always Enabled
Necessary cookies are absolutely essential for the website to function properly. This category only includes cookies that ensures basic functionalities and security features of the website. These cookies do not store any personal information.
Non-necessary
Any cookies that may not be particularly necessary for the website to function and is used specifically to collect user personal data via analytics, ads, other embedded contents are termed as non-necessary cookies. It is mandatory to procure user consent prior to running these cookies on your website.
SAVE & ACCEPT