Why Do Chinchillas Bark? 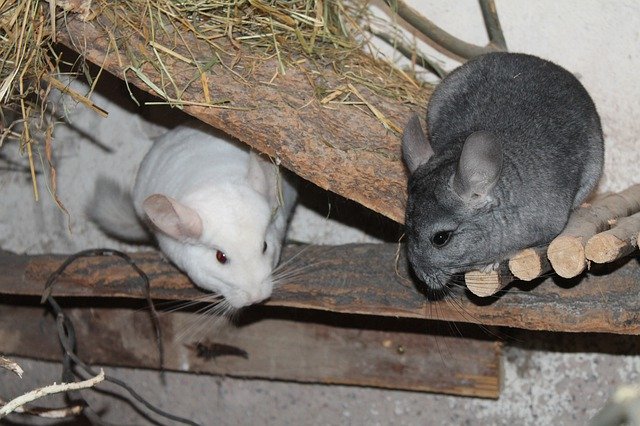 Chinchillas bark for a variety of reasons in the wild, since they are prey animals. They use their bark as a warning to the other chinchillas that danger is lurking near. As pets, they still use this warning call, but their perceived threat is quite different than in the wild. Chinchillas also make many other unique sounds for various reasons. Like humans, they use different calls to communicate.

The chinchilla warning call or bark does sound like a quick, sharp dog bark. It is, of course, a higher pitch than you’d expect from a dog. Chinchillas use this call to tell other chinchillas of danger. This call isn’t only used once, they will bark in succession with a series of barks. Once a chinchilla uses this warning call, they will usually hide, wait, and then come out to see if the danger has passed.

Your new chinchilla may use this sound a lot when first brought home. There are many unfamiliar noises in their new surroundings. They will want to alarm at anything unusual to them. Don’t let this disturb you. They will settle in time and should slowly stop using this call as much.

The alarm call is a high, piercing shriek. Chinchillas rarely use this sound as it is one of desperation. They will use it when cornered to try to warn off predators. Your chinchilla may use this if in pain. If this occurs, you should take your chinchilla to the vet as soon as possible.

They also have a shorter alarm call that they use when surprised by an unexpected noise. Chinchillas may cry out while running away to hide.

This cry is used mostly by nursing mother chinchillas, especially if they have three or four babies. These babies will fight for mamma’s milk and sometimes get carried away, making mom mad. Mamma chinchilla will make a loud, raspy growl to let them know enough is enough. If the fighting continues, she may stand on her hind legs and spray urine at them to break up the fight. That sounds disgusting, but it works for chinchillas.

Chinchillas love to jump, run, and play. Even in a spacious cage with a couple of chinchillas, disputes can arise. A chinchilla can get upset at a mate for disturbing them. They can fuss at one another by chattering or clicking their teeth at each other. They can also make a loud, raspy growl such as the one mamma chinchilla makes when trying to get her babies to settle down.

A contact cry is a softer, gentler sound. Chinchilla babies make this soothing little grunt when they are content and snuggling with mom. It’s like a piglet’s tiny oink of contentment. Even adults will use this sound to convey comfort. One exception to this is when a chinchilla gets lonely, they will make this sound as if to get a mate to come plays or snuggle. There may be a bit of a difference in this call, but can be subtle. Until you get to know your chinchilla you may not be able to discern the which meaning they are using. Although, if they are alone and making the noise, you can pretty much be sure of the purpose.

This is called the Decoy sound in several articles, but I’m not sure why. Decoy, to me, means they are distracting something. This call, a throaty chirp, is used by chinchillas when they are looking for something, a playmate, a snack, maybe it’s time to get out of the cage for some exploration. This is an adorable sound.

Chinchillas can put on a show if bugged by another cage mate. They will make a soft warble sound that says, poor me, I’m defenseless. Please don’t hurt me. They learn this call from the time they are a kit and will continue to use it throughout their lives.

A chinchilla defense sound is a short, quick burst that sounds like a rough click. They will use this as kind of ouch, you’re pinching me sound. Mothers will use this when their babies get too harsh when nursing. In certain situations, such as chinchillas raised without much human contact, they will use this call or cry when humans approach their cages. Sadly, this is usually on a chinchilla farm.

If your chinchilla lets out a blood-curdling scream, you should immediately check on them. This indicates something is wrong. Even if you don’t find any sign of injury or illness, you should have a vet check them out. This isn’t a sound you want to hear coming from your chinchilla.

This doesn’t refer to them chewing on their toys or houses to grind their teeth down. This applies to them grinding or chattering their own teeth. A vet should check your chinchilla over to be sure there is no illness or injury because this isn’t usually normal behavior.

Some chinchillas do this as a sign that they are happy and content. This is not usually the case, but if your chinchilla has had this habit from the time you got them, then it’s more than likely true. This could also be from stress.

As stated, you should take your chinchilla to the vet and have them checked out to be sure they are in good health.