How Much Sleep Does a Chinchilla Need? 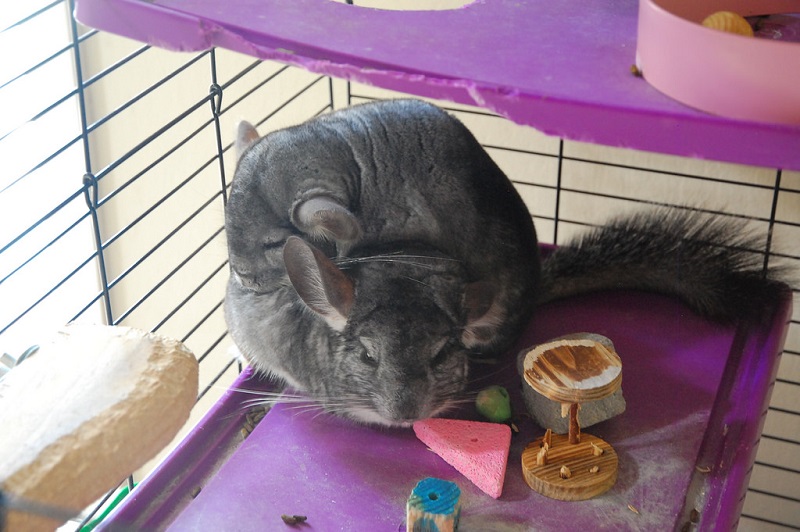 Chinchillas need from eleven to fourteen hours of sleep a day. Chinchillas are crepuscular, meaning they are most active at dusk and dawn. They are sometimes active at night as well, but this is in intervals where during the day they will sleep for hours on end. Up to twelve hours consecutively, sometimes a bit more. However, chinchillas each have their internal clocks that may differ from this.

When do Chinchillas Sleep?

In the wild chinchillas sleep during the day and are up at night. Their natural habitat, such as burrows and rock crevices give them safe places for an uninterrupted, stress-free sleep. Chinchillas are alert even when they sleep so that if there is a danger, they can be on the move in an instant.

At home, you should provide them with enclosed sleep areas that may mimic their natural habitat. Even then, they may not conform to sleeping all day and up at night. As pets, each chinchilla will find a schedule that works with yours. You do need to be sure your chinchilla’s cage is in a quiet room that has little traffic. The last thing you need is a stressed chinchilla from too much activity in the house.

How Does My Chinchilla Sleep?

The ideal position for sleeping chinchillas is on their feet, with their head down against their chest and their ears back, making them a little chinchilla ball. They sleep this way so that if they need to escape from a predator, they are already on their feet.

Chinchillas in captivity may find other positions to sleep in because they come to feel comfortable with their home and family.

Chinchillas have dreams. They will make small sounds and quick, little movements while they sleep. They also sleep with their eyes open at times, but their iris can close completely to keep the light out.

Some chinchillas will sleep on their sides. The reasons for this may be that you have a pregnant female, it’s too hot, exhausted from exercise, or they like to sleep that way.

Unless you notice something wrong with your chinchilla, the position they sleep in is more than likely just the way they like to sleep.

Chinchillas need at least twelve uninterrupted hours of sleep so that they get their rest. If they don’t get enough sleep, it becomes detrimental to their health. You need to make sure your chinchilla has the right bedding and some enclosed areas to make them feel safe when sleeping. Remember that your chinchilla is crepuscular and will be most active at dusk and dawn. Their habits can change with your use of artificial light in the room. To avoid interrupting their sleep, place their cage in a quiet room that isn’t used or cover their cage during the day. Do make sure their room is quiet. The sounds a family can make will be quite disruptive to your chinchilla.

Do you have a chinchilla? How does your chinchilla sleep? Does it have a favorite place to sleep? What about a favorite position? We’d love to hear from you. Please leave a comment below.